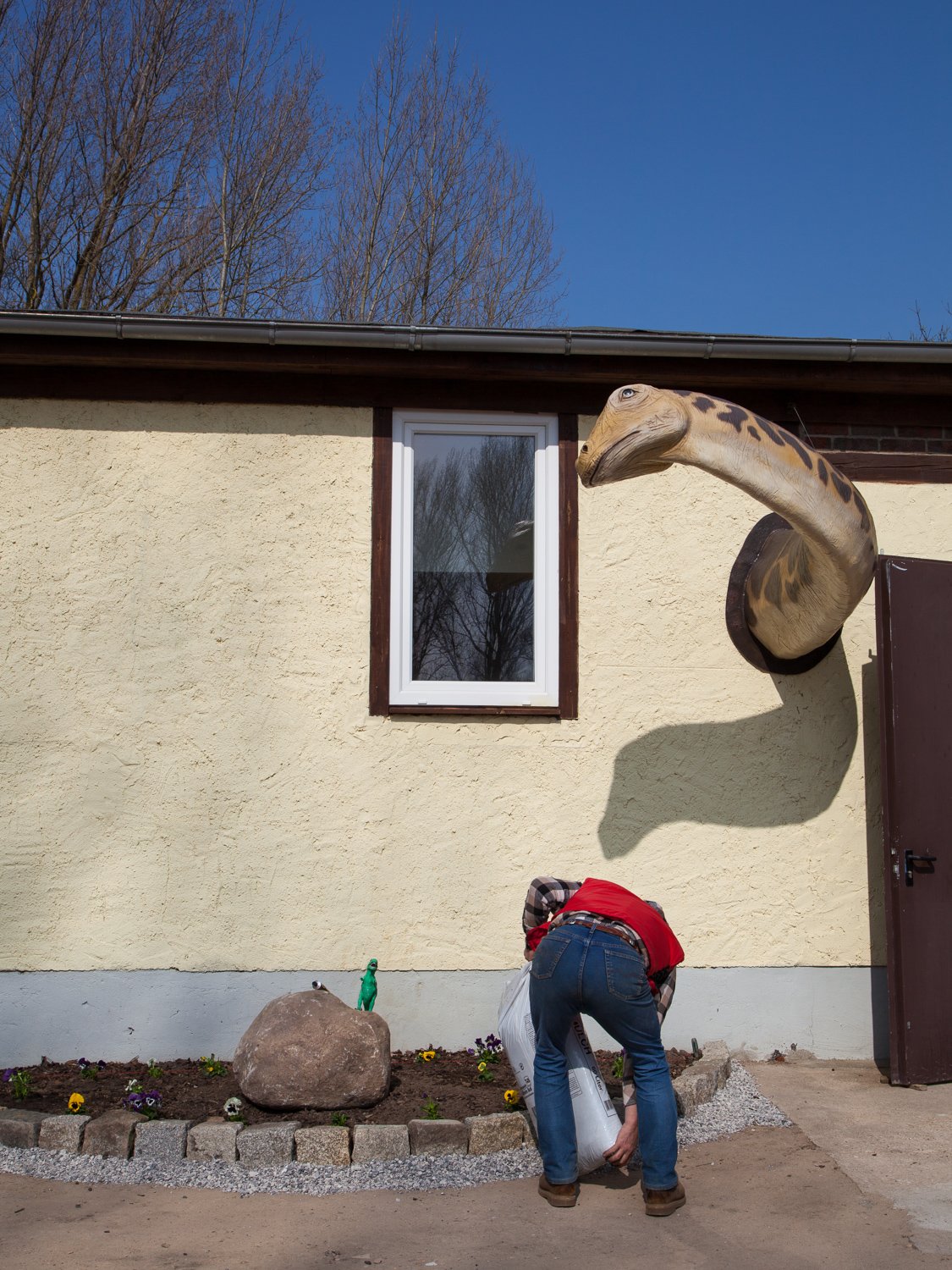 The ludicrous story about a black dot and a passport control that starts the book already says a lot about Torsten Schumann and his view of the world.

His images even say more. Namely, that life in the so called civilized world is full of curiosities. Schumann photographs on the street, nothing special actually. And yet we see in his book the sinking of the Titanic, a woman who disappears under a magic hat, a sausage, which mutates to a ventilation tube, a designer furniture made of foam and bottom panels and a bikeway turning into a rushing river. The provided order is permanently infiltrated - by coincidence, incapacity or ingenious ideas.

There is a great review from Christer Ek on
https://whoneedsanotherphotoblog.wordpress.com/2016/08/05/more-cars-clothes-and-cabbages-by-torsten-schumann/

Torsten Schumann is a German photographer, born in 1975 in Dresden. Thus, until the age of 14, he grew up in German Democratic Republic. It has been said a lot about the communist bloc countries, but I have absolutely no idea what it could have represented to live in one of these countries. However I think that having experienced the transition of the unification of Germany leads to a very personal way of looking at the world. He started photography in the 90s, following various courses and began exploring public space, mainly in Germany.

Torsten could be considered a humorist, which is the sense of the foreword written by Hannes Wanderer, who published the book through his excellent publishing house Peperoni Books. Torsten likes to play with reality. He walks through the city, like everyone else, but it seems not to see the same things. He’s the kind of guy who, when you point your finger to show him something, turns his head to look at the other side. Nothing is more boring for him than the obvious!

This way of looking at the world transports us into a fantasy world. I can not help but think of Lewis Carroll’s Alice, in which Torsten would be the mysterious rabbit that we want to follow and let it guide us in this mysterious world that is behind the scenes. It is a story passer, a revealer of the world. He allows us to understand what hitherto remained mysterious to us, what we do not see because of lack of understanding. We look at the world with distance, as spectators behind the mirror, and thus we discover the « behind the scenes » of these public spaces we travel regularly without paying attention.

There is a kind of minimalism of the ordinary in the photographs in the book. And yet the compositions are very sophisticated. One wonders how the photographer have gotten there, and what patience it took him to capture these moments. The colors are right, framing affirmed. Everything or everyone finds his place. Obviously, this work questions once again the relationship between beauty in representation and beauty in life. The subjects of the photographs are not beautiful, far from it. This is an apology of nooks, waste, poorly finished bricolages, all the little abandoned places that bother us, that « spoil us the view », to turn them into paintings with precise compositions that we think just coming out of the workshop of a painter who would patiently reconstructed the scene from still moments. The captured characters are timeless, frozen for eternity in this pose somewhat ungainly and clumsy, but that makes them so endearing.

Torsten is a precise colorist who manipulates color values subtly, from a shimmer of bright colors to images of such neutral gray that you would think they’re black and white (one of my favorite is the one of a lower part of a building and garage with a bent woman who melts into the gray values of the building). And of course, he also cleverly uses the light that comes to saturate a detail or reveal the transparency of a shadow. Each photograph is so « rich » that it takes time to read and reread this book. With each reading, we discover a detail that we had not noticed before. We have to take the time to fully understand this representation of the world.

0
Your bag is empty
Start shopping